Follow The Overseas Magazine – Blog for Acts Consultation on WordPress.com

When was the last time you ran outside in the open? I mean really ran, with your heart and soul and with no worries. Just taking it all in – the run, the effort, the tracks, the wind, the sights, with no smoke and no pollution around – the serenity of it all! And rain. Rain all through the route. At times crazier and teamed up with clouds coming right at you. You think this is unreal. Believe me, it’s not. I am not describing an imaginary scenario. I experienced it all when I participated in the Sohra Cherra Marathon – a one of its kind marathon which fits the above description and made a memory of a lifetime.

I have been into active running for the last 22 months and a big thank you to my friends, Kamal and Sunil, who got me interested in this sport. In the past, I was not interested in participating in such local events, leave alone outstation ones! But then, you know how friends are. They have a way of convincing you.

The first running event that I ever participated in was in December 2014. It was  a 10km run organised by Tata Steel/Procam in Kolkata. It literally left me out of breath. And no, it was not at all pleasant. I was huffing and puffing and almost gave up before the finish line. But I was glad when I somehow managed to complete it. Considering that, I would have never, even in my wildest dreams, think of running a half marathon! But the truth is that once you start running, you get hooked. And as Gaurav, a running buddy at Kolkata Ultra, says, after a distance, the mind gets controlled by the body rather than the other way around.

After that first run in Dec 2014, I participated in several other events including my first half marathon event in Delhi in November 2015, followed closely by a 25km run in Kolkata (the tsk25) in December 2015. You’re right, it was the same event which had left me almost faint in 2014.

So there I was, basking in self satisfaction at having completed and participated in these runs when the time came for registering for the Sohra Cherra, a marathon on an uphill route at Cherrapunji. I was not too keen about it but there my friends were again!  And of course, learning about the run on the internet did help and pushed me to go for it. The pictures on the event website were just so captivating that I could not resist. Registration done and sealed, I kept wondering how much time I would need to complete this uphill battle. The Delhi half marathon had taken me 2 hrs 15 mins (which incidentally is my personal best) and the tsk25 had stretched me ruthlessly to just under 3 hrs. So, I targeted about 3 hours here too since I was not aware of the terrain at all. And running uphill and downhill is a totally different ball game compared to running on flat roads. You need to control your pace while coming downhill since it does hit your knees very hard. And while going uphill, you need to ensure that your breathing is regular and completely in control. Never overdo it.

The big day came and the five of us, all school friends, left on the 16th July 2016 by flight to Guwahati and from there travelled by road to Shillong and once inside the town, we headed straightaway for the Collection Centre to collect our Bibs and running tees. My running group members had already reached a day earlier by train and we met up there at the Centre. After collecting our goodies and stuff, the five of us headed off to a quaint little building housing our guest rooms just off Police Bazaar. We had to book this guest house independent of the running group owing to space constraints. Police Bazaar is the central point in Shillong for eating, shopping and hanging out. 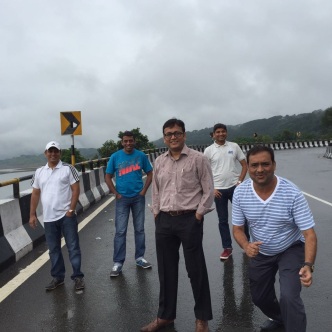 It had started raining when we left the Centre and by the time we checked into the Guest House, it was pouring rain. We were famished and after dropping our stuff, we went out in the rain with only a couple of umbrellas and wind-cheaters to get food. There is this place called ‘City Dhaba’, which was close by and famous for its food. We had an enjoyable meal and headed back to the Guest House, with the rain still pouring hard. Once in, we laid out our running gear for the next day and retired for the night.

I found it a little difficult to fall asleep with the excitement building up, and coupled with a little dread considering the rain outside. How would I run in such heavy rain! When we woke up the next day at around 3.45 in the morning, the rain had stopped. Whew, what a relief! We got ready and left by car to the starting point, which was around an hour’s drive from our Guest House. And guess what? The rain started pouring again and by the time we reached the place, the rain was pelting down. I thought it was crazy of us to get out of the car in that downpour. Crazy me, I thought. The assuring thing was that the place was full of of other crazies.

Finally the anticipated announcement – runners get ready at the start line. This is it, I thought to myself, all second thoughts get behind me now and just run! The trumpet sounded and we were off. Us friends started off together and stayed close during the initial part of the run. Slowly, the crowd of runners started spreading out, some falling behind and some racing up ahead. By and by, I started covering the distance, km by km. But the rain was indeed making it difficult, especially with the wind blowing hard and at times, almost pushing me off my running track. But the sights – simply magical! You have got to be there to believe it because no matter how hard I try to describe it, you will have to experience it in person to really understand. Running in the clouds was the tagline for the Sohra Marathon. And how true that was!

At times visibility was down to 50 metres and all around us were just clouds. Nothing to disturb our tryst with nature at that point. Just wow!

After almost 13-14 kms, I took off and started running ahead of my friends. Now running alone, my finishing points got multiplied into the various runners in front of me. By and by, I started touching one finishing point after the other. 15km. 17km. 19km. Just 2 more kms to go. Thankfully, my body was controlling the show while my mind was busy taking in the sights. Just as I was clear about the finish and decided to sprint the last lap, the track suddenly rose up to a 40-50 degree incline! How unexpected! I slowed down to a walk and just walked up that incline, which was around 50-75 metres steep uphill. I knew that running up that sharp incline would not have done me any good. Finally I caught sight of the finish line and couldn’t help but race up and burst through it, all in one breath.

Suddenly, it was over. The last several months of training, the excitement, the sights and the trip. I almost felt an emptiness inside and wanted to do it again so it wouldn’t end so soon. The rain continued to fall and at that point, I was enjoying it so much that I did not want it to stop. The dread of the previous night had vanished and all I felt was happiness at having completed my first run uphill.

For all you runners out there, give it a try. Love your body and take good care of it and bear the pain of training when you’re preparing to run. There is an inexpressible sense of freedom in it. Running can help you get a different perspective on life, unbridled by the challenges, fears and disappointments of everyday life. And for the ones who are still contemplating if you should start running, just take the first step and do it. 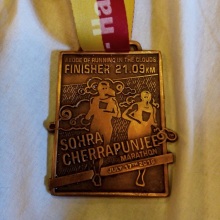 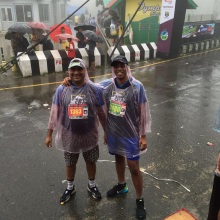 Guest author Rohit Elisha Pandey is a husband, super-dad and runner. He is also a successful Chartered Accountant and passionate about writing.

View all posts by The Overseas Magazine

What do you think? Cancel reply